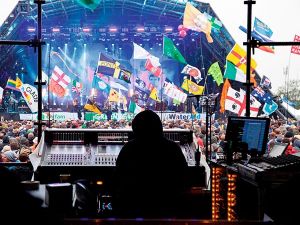 900 acres of Somerset farmland, 177,000 people on site and three full days of music, entertainment, political speaking, campaigning, and other worldly activities marked the return of Glastonbury.

Music Bank has been officially involved with the festival for 21 years. As well as supplying individual artists on request the company also supplied the generic backline and risers to so many of the iconic stages and areas of the festival. These requests come from the production team running that area. Music Bank's Jimmy Mac explained: "Seeing the festival grow and transform every year is great. Dick Tee and his team are amazing to work with and even with the biggest artist in the world on the Pyramid, the team always make sure we have what we need to service all the stages on site. Simply put there is nothing to compare with the Glastonbury experience rain or shine!

"Of course being based on the dock of the Pyramid stage makes it a bit easier to service The Other, John Peel, BBC Introducing, and The Park but we also were supplying West Holts, The Acoustic, Queens Head, Leftfield, Silver Hayes, Avalon, Rabbit Hole, West Holts, Latino, Crow's Nest, Bandstand all of which meant frequent drives through punter land!

"We carried 39 backlines this year and had two spares which made it our biggest ever! Some of our favourites this year were The Bank's regulars Primal Scream, Chic, Public Enemy and Nas. The stand out moment has to be when we were approached rather timidly by The Rolling Stones' crew for backline; Mick and the boys had an on the spot jam in their dressing room. We helped them out and were even asked up on stage as a thank you!"

"Originally myself and some school friends used to do lighting for Michael's gigs in the Wagon Shed next to the farm house in the late '70s," Aggreko's Bill Eagan told TPi. In 2013, the power company's 29th year at the festival, even the very moment where it all began is a memorable one. "One year my friends were at the festival when the Pyramid Stage generator stopped, and being mechanically minded they wandered round the back to help (you could in those days). It turned out that nobody had thought to fuel the set, nor knew how to get it going again. They sorted that out and the next year got the gig to refuel the six generators on site.

"I joined them in this enterprise the year after in 1984 after my university finals, sleeping on the back seat of my old Hillman Hunter and driving around in a tractor with a load of jerry cans. This then developed into us setting up our own business, Entertainment Engineering, then supplying and operating the generators for a few years as the festival grew slowly. Eventually we also took on the wiring of the site and stages, the market stalls were run separately then, by now as part of the original Templine Ltd. I have then continued my involvement through the enormous growth of the festival and its transition into a national institution, and through the various corporate changes that have lead to Aggreko being the primary contractor for all the temporary power at the festival. Over the years, one of our key learning's has been that it is worth spending the money on good distribution especially not scrimping on individual RCDs. Although the initial costs are a lot higher the difference that having a coherent RCD discrimination policy and the means to implement it makes to the safety and reliability of the system is enormous," added Eagan.

This year around 250 generators with an installed capacity of approximately 30MW (20,000 houses worth) were supplied by Aggreko. 1400 distribution boards, 34kM of Festoon lighting and 90 staff, 1,000 floodlights and thousands of metres of cable from 16A single phase extension led up to 150mm five wire power-lock feeds.

"We make considerable efforts to run as much as we can on 100% Waste Veg Oil derived Bio Diesel, achieving around 20% of the total fuel burn. This is technically challenging with only certain engines suitable and separate fuel handling required and it does cost significantly more so there are commercial pressures too. We have also invested in improving both our refuelling equipment and processes to ensure we minimise the risk of a fuel spill and also that we can react quickly if one occurs.

"This year we engaged, with the Festival's Sustainability department and other interested parties, in a process of recording more data from the sets when they are running throughout the show so that we can try and reduce genset sizes and increase efficiency across the event. Obviously this can be difficult as no Area Organiser wants to have too small a generator and in general there is little actual data as to what loads really look like (rather than how big the plugs are). We are continuing this work with other festival organisers too to develop this approach across the industry.

"Another aspect of the greening of events that affects us significantly is the very rapid adoption of new stage technologies, especially anything LED. This is dramatically reducing the power required to put on a show but is also causing very significant power quality issues that many users are unaware of but that can wreak havoc with a generator system if you are not prepared for it," he concluded.

The Event Safety Shop's Tim Roberts was working on Glastonbury for the 30th time. Having started his Pilton experience playing bands, he then became site crew until he was appointed the Health & Safety Coordinator in 2002. Roberts had also worked as a Stage Manager, Site Manager and Production Manager for the festival. With the change in management and licensing this year, Roberts explained the challenges the eight management sectors faced: "We have to cover our objectives including legal compliance and customer satisfaction. We're always seeking practical solutions to the challenges that we face. I've had involvement in a wider range of planning discussions than previous years, this year TESS took on the Glastonbury Silver role too."

The Silver is a group of operational controllers. With three in the main compound and three around the site as troubleshooters, TESS is at the helm of safety welfare. Roberts continued: "The number of attendees are broadly similar to the last festival. We sought to increase the number of public transport to decrease the amount of cars on site and so integrated ticket packages and worked on promotions for National Express. We're content with the numbers of people that attend. The site is at a safe capacity. We could let more people in, but we want to keep people happy and maintain the customer experience."

Another point to mention this year was the incredible weather, which wasn't traditional for England. Roberts called in professional weather service, Weather Ops, of Oaklahoma, USA. "They gave us a first rate service. This year we weren't worried about the weather but if we had have been, we'd have had the detailed information if we'd needed it. You can call a Forecaster at their offices 24 hours a day."

The festival also has a long-term relationship with a company called festival medical services, which provides nurses, x rays or any clinical equipment needed to deal with medical situations. "There is an overall duty of care for the workers on site. This year we implemented a new GP service, where staff can get prescriptions. Seeing a paramedic is fine, but they can't prescribe medicine, so we set up this new service via a local clinic," added Roberts.

Welfare services meanwhile provides a service for psychological or emotional issues during the festival. "We've implemented strategies to help prevent crime as well. We saw a reduction in crime this year, down by 33%.And we put together a new safe guarding policy for children and vulnerable adults on site," he said.

"We all have a little part to play in the great festival, it's unlike any other. This is a charitable organistion. Millions of pounds are given away to charities each year, both internationally and locally to create affordable housing for Pilton and other local villages. No other festival I know gives away a huge amount of the profits to a needier cause like in Africa or to locals who need somewhere to live. Michael's position on that is absolutely admirable. He's beyond committed to the cause and my admiration for him keeps me returning to the festival," concluded Roberts.

For the second time, Eve appointed events crewing firm Gallowglass to construct the 16 km of Eve fencing that secured the festival site. Work began on the 20 May on the 4.12 metre high Super Fortress fence running around the site's 8km perimeter, plus the second, interior mesh fence.

Rick Barnett, Managing Director at Eve, said: "Owing to the enormity of the project, we work very closely with the event organisers from start to finish so the temporary infrastructure is constructed on time and to exacting standards. For this reason, we have been working with Gallowglass for several years now on a range of projects, and our priority, in addition to speed, is to work with a safety-conscious, professional outfit. We also know Gallowglass has sufficient resources to cover all eventualities."