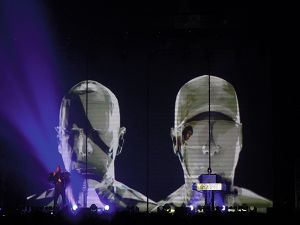 "This is more of an art and design or theatre based production than a normal music show," revealed Pet Shop Boys Production Manager, Thomas Stone, as the crew prepared for the Manchester Arena performance. "I've done shows in the past featuring content, video walls and projection, but this is a gig with a story to it. It's interesting to work with people such as Show Designer, Es Devlin, and feed off their experience and knowledge. This is such a great show because it has everything - big lights, content, lasers, incredible choreography, the hits and new songs - and it's full of energy."

The task was to achieve the look and feel of a large show, whilst it being compact to transport. "When we freight this show around South America using Sound Moves, for example, we're a one truck show, with four freight palettes weighing nine tonnes," continued Stone. "People would probably say this production was a five truck show by looking at it. In the UK we provide our own production, but when we do flyaway or freight shows we pick up lights and PA locally so we only carry certain production, control, projectors, lasers and set.