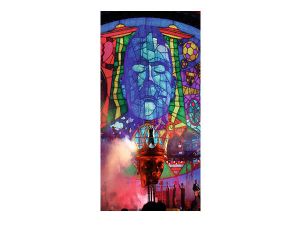 For an artist known for his larger than life stage presence, Robbie Williams' exquisitely designed stadium production, take the crown, needed to be awash with inventive pyro, ambitious flying sequences, incredible sculptural elements and explosions of colour. TPI's Zoe Mutter spoke to the innovative team behind the tour at the Etihad Stadium.

Robbie Williams was the first artist Wob Roberts [Snow Patrol, Coldplay] production managed, working on every tour since they first joined forces in 1997. "I was asked if I wanted to be production manager by Robbie's management who were managing Bryan Ferry at the time and I was his keyboard tech / stage manager," said Roberts. "It's been great and a steep learning curve - from a club tour to a multiple date arena tour to stadiums.

Packaging the show was demanding, requiring a monumental 38 production trucks for 26 European shows. "There are more gadgets on this tour - set piece items Robbie's never used. We've always had extravagant stages and video, but we have various gags and heads this time around which drive around and emit balloons, fire and water vomit," he said.