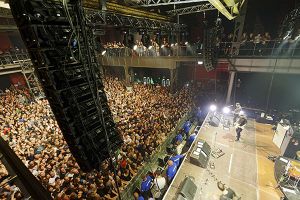 When punk rock band, Beatsteaks, had the idea of staging a fund raiser for refugee support organisations at the Dresden Eventwerk, Complete Audio offered their services.

Fielding his Martin Audio MLA Compact system, André Rauhut, who heads Complete Audio, reported that the band had originally planned to end their 2015 touring schedule at the Lollapalooza Festival until this came along. "And it turned out to be the longest Beatsteaks show ever running to two and a half hours!" It had been a strategic decision to stage this show in Dresden, with the beneficiaries being the charities, 'Sächsische Flüchtlingsrat' and 'Dresden Für Alle' as André explained. "There had been a lot of right wing activity here over the course of the past three months and by going to the east they could show their support and stand up against right wing actions."