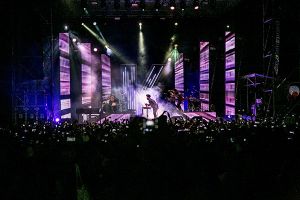 The bands last show of the tour was the Festival del Prosciutto di Parma for which the rental company All Access provided its ground-breaking MLA to Fare BIS Fare, service company founded by Giuseppe Bisbano. The configuration adopted by PA manager, Paul 'Red' Talami, consisted of eight MLA elements per side (including an MLD Downfill) and four MLX subs per side. In addition he added two further MLA enclosures, stage right. Explaining the reason for the extra reinforcement, Red said, "While the configuration was properly sized to cover an area of ​​70 by 50 meters the sold out arena was ' unbalanced ' on the PA right. A wide area was beyond the coverage range of the main PA, stretching to over 120 degrees, so I opted for a small secondary array of two MLA boxes, resting on an MLX sub to cover this area out to the right."